You are here: Home1 / Priory Lodge of Mark Master Masons 693

The Provincial Grand Master of the Mark Province of East Lancashire has consulted at length with the Mark Grand Secretary as well as the Executive and they have agreed that the Suspension of all Masonic Activity in the Province will now be extended until the 31st October 2020.

The first came after the Fellowcraft Degree where the candidate was ‘made’ a Mark Man, and the second after the Master Mason’s Degree when he was advanced to the Degree of Mark Master Mason. In 1856 English Mark Masons established their own Grand Mark Lodge and the two Mark ceremonies were combined into one. Since then it has been conferred, not in Craft Lodges, but in Mark Lodges consecrated for that purpose. The ritual explores the building of King Solomon’s Temple and, like all other Masonic Orders, the teaching of the Mark degree greatly adds to the knowledge and enjoyment of Masonry and links to other orders in Masonry, Royal Ark Mariners, Royal & Select (Cryptic) & Allied.

Priory Lodge of Mark Master Mason’s meets on the first Wednesday of March, October and December plus the third Wednesday in June with their installation meeting taking place in March and celebrated it Centenary in October 2019.

Want to know more please get in touch. Email us at PrioryMark@MasonicHallWhalley.co.uk

As with Craft Freemasonry, Mark Masonry conveys moral and ethical lessons using a ritualised allegory based around the building of King Solomon’s Temple. In the Mark Masonry ceremony of ‘advancement’ the candidate is required to undertake the role of a Fellowcraft, thus the Degree is seen as an extension of the Fellowcraft Degree, and the philosophical lessons conveyed are appropriate to that stage in a candidate’s Masonic development. The advancement can be said to comprise two Degrees; initially as a Mark Man followed by that of a Mark Master Mason.

While the Fellowcraft Degree teaches a Mason what the historical wages of a Fellowcraft Mason are, the Mark Master Mason Degree instructs him how to earn those wages, how to prove the work is his own, and what the historic penalty for fraud was during the building of the Temple. The candidate is helped to choose a Mason’s mark, and is introduced to another extension of the Hiramic myth, relating to the manufacture, loss and re-finding of the keystone of the Royal Arch.

The Mark referred to is the mark or symbol with which the stonemason identified his work. Such marks can still be found on the stonework of many cathedrals and important buildings.

The first record of Mark Masonry in England is found in 1769, when Thomas Dunckerley, as Provincial Grand Superintendent, conferred the Degrees of Mark Mason and Mark Master at a Royal Arch Chapter in Portsmouth.

Following the Union of the Antients and Moderns Grand Lodges and the formation of the United Grand Lodge of England in 1813, the Articles of Union stated that there would be three Craft Degrees only, including the Royal Arch but excluding the Mark Degree. For this reason, while in the rest of the world Mark Masonry became attached to Royal Arch chapters, in England it was proscribed from the Union until the 1850s. It was a group of Scottish masons who procured an illegal warrant from Bon Accord Chapter in Aberdeen to set up a Mark lodge in London. An attempt to add Mark Masonry to the approved craft workings was defeated in 1856, and a Grand Lodge of Mark Master Masons was created in response on Monday, 23 June 1856.

As Freemasonry spread around the globe in the 18th and 19th centuries, Mark Masonry expanded with it, with six daughter Grand Lodges and the Degree being worked under alternative administrative structures elsewhere.

In England, the current Mark Grand Master is Prince Michael of Kent 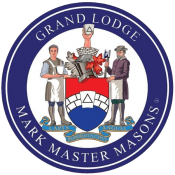 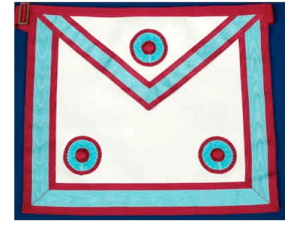 The ordinary members’ regalia comprises an apron and breast jewel. The apron is of white kid with a triangular flap bordered with a 5cm ribbon of light blue with crimson edges. It has rosettes of the same colour whilst Masters and Past Masters have the rosettes replaced with silver levels. The jewel of the order is a key stone appended to a ribbon which matches the apron and bears a mallet & chisel which are the tools of the Order. The key stone, which bears certain characters, forms an integral part of the ceremony.

The Mark Province of East Lancashire celebrated its centenary in 2010 having come into being on the 6th September 1910.

Grand Mark Lodge decided to create Provincial Grand Lodges to assist lodges with local administration and advice, and The Province of Lancashire was formed in 1871 and then further split into East and West Divisions in 1910.

East Lancashire has a membership of over 1700 members attending 53 Mark Lodges and 33 Royal Ark Mariner Lodges with every Masonic Hall in the Province having at least one Mark Lodge. Meetings usually taking place between 2 to 4 times a year.

The Province stretches from the Cumbrian and Yorkshire borders in the North and East, along the route of the A6 trunk road in the West to the Cheshire border in the South, which is the same area covered by the Craft Province.

The Provincial Grand Master, his Deputy and two Assistants administer the Province and maintain a close contact with the membership by visiting Lodges for Installations, personal milestones and pastoral visits. They are also accompanied to these events by a deputation formed from Provincial Officers of the Year.

The Mark Province of East Lancashire will be hosting the 153rd Mark Festival which finishes in 2021. To find out more click here. 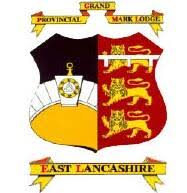