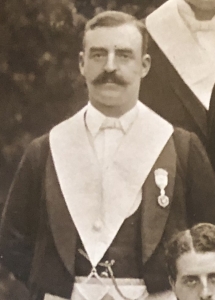 Jonathan was born in Blackburn in September 1855. In 1879 he was the first Secretary of the Whalley Union Club Company Limited. He married Eliza Annie Pitt in September 1880 and qualified as a solicitor.

He was the Lodge Secretary at the founding of Abbey Lodge but only held that office for one year as Jack Hargreaves took over as Secretary in October 1895.

The post of Registrar of the Blackburn District Registry of the High Court of Justice and the Blackburn County Court, vacant by the resignation after 41 years’ service of Mr. John Bolton, has been conferred by Judge Coventry upon Mr. John(sic) N. Withers of Blackburn, one of the senior solicitors of the town.

The post is worth about £1,200 per annum, and a condition has been imposed that the new Registrar shall relinquish private practice.

He had a liking for living by the sea having resided at St. Annes-on-Sea, Birkdale and Southport. He died in a Folkstone Hotel in October 1931 at the age of 76. Possibly due to his movement around the county and beyond he didn’t progress through the Master’s Chair in Abbey Lodge.