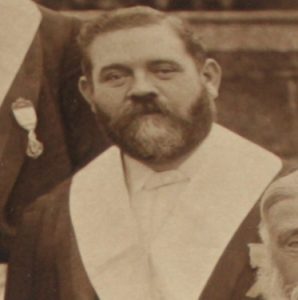 From the records we have about the Red Rose of Lancaster Lodge, 1504, William was a Founding Member in 1875 at the age of 23. It is believed that he, whilst Worshipful Master of 1504, along with Colonel Starkie, acted as sponsors to those gentlemen of the Union Club wishing to become Freemasons. In 1893 and 1894 there was a flurry of activity at Red Rose of Lancaster Lodge with Initiations of 3s and 2s taking place with the names now well known to Abbey Lodge. Hence the Founders List displays numerous 1504s next to names. The Red Rose of Lancaster Lodge of Padiham was truly Abbey’s Mother Lodge. Sadly, 1504 handed their warrant back in May 2018 and no longer meet.

In the photograph of him accompanying this text his Past Master’s Jewel can be glimpsed behind the head of Colonel Le Gendre Starkie.

He was  Abbey Lodge’s first-ever Director of Ceremonies, but sadly never attained the Master’s Chair.

William passed to the Grand Lodge above on the 12 April 1899 the day before Colonel Le Gendre Starkie died. An Article entitled Funeral of Mr. W. Bear, of Padiham was published on Wednesday, April 19, 1899 in the Burnley Express. 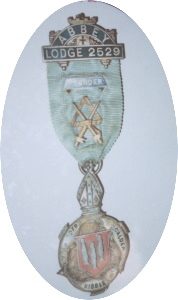 He died on 12 April 1899 at the age of 46 and is buried at St. James’ Church, Altham. Many Freemasons attended his funeral on 15 April 1899. An in-depth article about the funeral was published in the Burnley Express on 19 April 1899, A short extract follows:-

The Founder’s Jewel displayed on this page is to be found in the Museum of Freemasonry, London where the accompanying photograph was taken. The Museum’s Catalogue attributes the Jewel to the Founding Inner Guard, Bro. T H Thompson. An Inner Guard Jewel has crossed swords pointing up whilst this Jewel displays crossed wands entwined pointing up. The Jewel held in London is that of the Founding Director of Ceremonies – W. Bro. William Bear Jnr.. 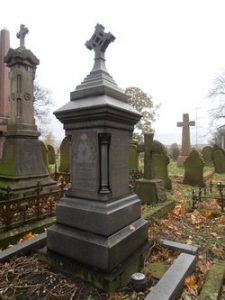