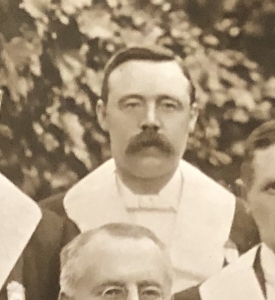 John Hargreaves was born in Blackburn on 13th December, 1860.

On 5th November 1875, two friends, John Lewis and Arthur Constantine, organized a meeting at the St Leger Hotel in Blackburn to discuss the possibility of establishing a football club in the town. Seventeen men attended the meeting and it was decided to establish the Blackburn Rovers Football Club.

Jack, as John liked to be called, and his elder brother, Fred both worked in the legal profession and became important figures at the Club. They had both played football at Malvern College (though only Fred is listed on the Old Malvernians Wikipedia page) and advocated that Blackburn Rovers adopted the quartered design of their school shirts. However, they suggested that the traditional green should be changed to the light blue worn by the Cambridge University football team.

Other players in the team included, Doctor (Doc) Greenwood and Jimmy Brown. In 1880 the club signed Hugh McIntyre, Fergie Suter and Jimmy Douglas from Scotland. This made them one of the best teams in England. This era has been dramatised by Downton Abbey writer Julian Fellows for Netflix and called The English Game.

Jack, who played at wing-half, inside-forward or outside right for his club, won his first international cap for England against Wales on 26th February, 1881. Also in the team was his brother, Fred Hargreaves. England lost the game 1-0. He won his second and last cap against Scotland on 12th March 1881 which England embarrassingly lost the game 6-1.

In 1882, Blackburn Rovers became the first provincial team to reach the final of the FA Cup. Their opponents was Old Etonians who had reached the final on five previous occasions. However, Blackburn had gone through the season unbeaten and was expected to become the first northern team to win the game. Doc Greenwood was injured the team included five players who had won international caps, Jack Hargreaves, Jimmy Douglas, Fred Hargreaves, Hugh McIntyre and Jimmy Brown. Jack Hargreaves played at left-half. The Old Etonians scored after eight minutes and despite creating a great number of chances, Blackburn was unable to obtain an equalizer in the first-half. Early in the second-half George Avery was seriously injured and Blackburn Rovers was reduced to ten men. Despite good efforts by Jimmy Brown, Jack Hargreaves and John Duckworth, Rovers were unable to score.

Blackburn Rovers also got to the 1884 FA Cup Final. Their opponents were Queens Park, the best team in Scotland. John Hargreaves played at inside right. The Scottish club scored the first goal but Blackburn Rovers won the game with goals from Blackburn lads, James Forrest and Joe Sowerbutts. He  held a FA Cup Winners’ Medal and played 3 times for England.

Jack Hargreaves was an amateur player and stopped playing for Blackburn Rovers when the Club began to rely more and more on professional players. During his time with Blackburn Rovers he must have struck up a friendship with Fred Birtwistle that saw them both become founding members of  Abbey Lodge.

John ‘Jack’ Hargreaves was Abbey Lodge’s Founding Tyler. He became Lodge Secretary in 1895 until 1897 when he was invested as Senior Deacon. In 1898 he became Lodge Treasurer and back to Lodge Secretary in 1899. With an eye to going through the Master’s Chair he became Junior Warden at the Installation in 1901 and Senior Warden in 1902. Sadly, he didn’t make it to the Master’s Chair dying on 13 January 1903 at the family home of Thorncliffe, Wilpshire at the age of 42. 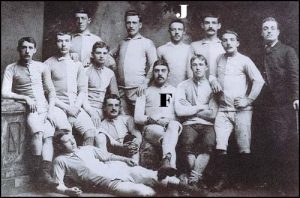 Blackburn Rovers won the Lancashire Cup in March 1883. From left to right,

Sitting on the floor: Jimmy Brown and Jimmy Douglas. 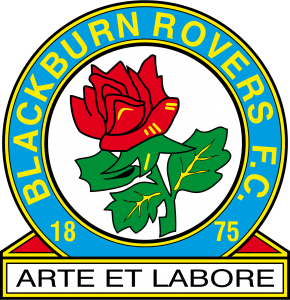 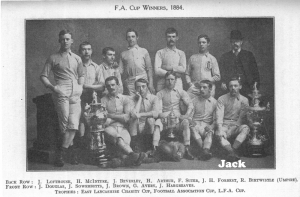 Jack Hargreaves sits at the front right next to the rather large and magnificent Lancashire Football Association Cup.

The death is announced of the famous amateur footballer, Mr. John Hargreaves, which occurred at Wilpshire, Blackburn, yesterday. Mr. ‘Jack’ Hargreaves played as left wing forward for the Blackburn Rovers in that club’s famous amateur days. The deceased, who was forty-two years of age, was the son of the late Coroner for Blackburn. He played in the Cup Finals of 1881 and 1883, and was celebrated for the frequency with which he performed the apparently impossible feat of shooting goals from the corner flag. He represented England on three occasions, playing against Scotland and Wales in 1881, and Ireland in 1882.

Editor’s Note: It was his brother Frederick who played against Ireland in 1882. See source information

One of the old school of Association footballers in Mr. ‘Jack’ Hargreaves, solicitor, of Blackburn, has just passed away at the age of 42. In the eighties he was well known as a member of Blackburn Rovers, before that combination embraced professionalism, and played for England against Scotland and Wales in 1881, and against Ireland in 1882. Mr. Hargreaves prided himself on the fact that only a serious injury kept him away from the field when chosen on the team, and at times he has been known to play when bruised from head to foot. Once in a match against Hibernians of Edinburgh, one of his colleagues noticed that Hargreaves shirt was stained with blood, and an examination revealed that the shoulder bone was broken and was protruding through the skin. Still Hargreaves played on to the end, but, of course, could not attempt a charge. He last played for Blackburn Rovers in the English Cup match of 1884, when that team won the trophy for the first time.