Alfred was born in Manchester on 28 July 1851. He was the youngest of 7 children. He studied chemistry and found employment as an analytical chemist.

By 1891 he was living at The Margorie, in Billington, Whalley with his elder sister Mary where he remained until his death in December 1926.

Alfred was initiated on the 1 February 1893 along with the Thompson brothers, John R. and Thomas H. into Red Rose of Lancaster Lodge, No. 1504. This would be the start of a long Masonic friendship between all three gentlemen as they followed each other through the offices of both their Mother Lodge and Abbey Lodge. All three were founders of Abbey Chapter and again followed each other in the same sequence through the Chapter Offices. As Abbey Lodge’s first-ever Organist, he attained the Master’s Chair in 1902 (following T H Thompson). He eventually gained the rank of Past Provincial Grand Organist. He also was a Founding Member of Abbey Chapter, No. 2529 taking the office of Scribe E.

Alfred’s deep friendship with Thomas H Thompson was lifelong for his Probate Record shows Thomas as the first of only 3 beneficiaries. 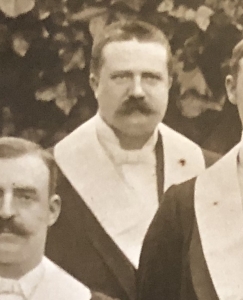