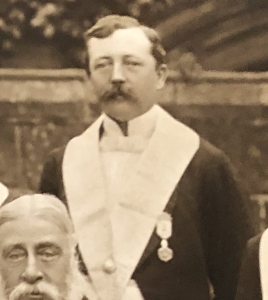 Fred Birtwistle was the son of William Birtwistle of Lower Fold, Great Harwood a cotton manufacturer.

Fred played left-back in Blackburn Rover’s first-ever game in 1875 but his appearances for the next three seasons lack documentation. By the time the Rovers entered the FA Cup for the first time he partnered Doc Haydock at full back but soon lost his place when Fergie Suter joined Rovers from Darwen. Thereafter his only opportunities came when pressed into service as an emergency forward. He held 2 FA Cup Winners’ Medals and was instrumental in the forming of the Football League.

At the Southport Sports of 1882 he finished second in the 120 yards against many of the best sprinters in Lancashire. In the heats he ran 112 yards in 12.4 seconds. He also played cricket for Great Harwood and was good enough to play for the Lancashire County amateur team. He was a keen shooter and huntsman being a keen follower of the Pendle Forest Hunt of which Colonel Starkie was one-time President.

Fred became a farmer and cotton manufacturer at Yee Tree House, Great Harwood but by the turn of the 19th century he was concentrating on the cotton rather than the agriculture. He became a director of the family firm, Birtwistle and Fielding. He married Florence late in life and died on 30 January 1913 in Stockport.

Fred did not progress through to the Master’s Chair in Abbey Lodge.